The work uses scattered perspective composition, which vividly records the urban appearance of Bianjing (also known as Tokyo, now Kaifeng, Henan Province) and the living conditions of all walks of society at that time. They are the witness to the prosperity of the capital Bianjing in the heyday of the Northern Song Dynasty. 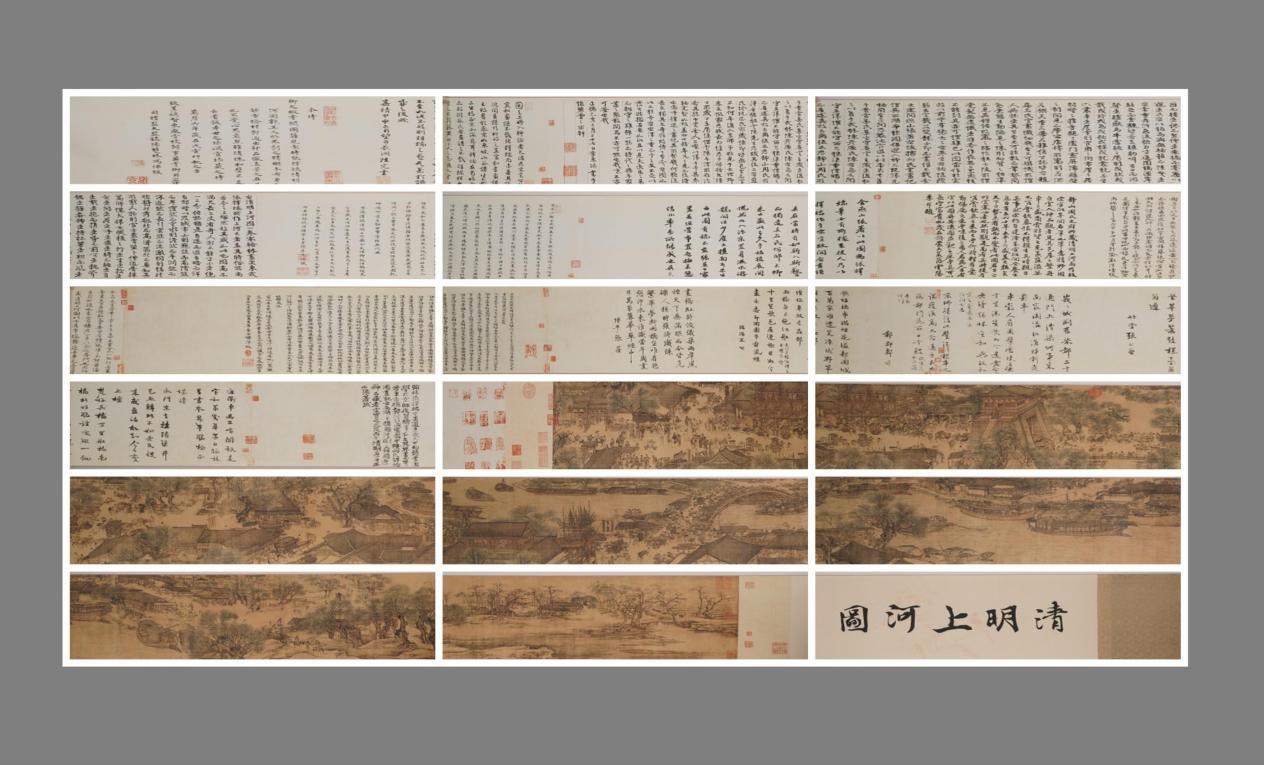 The Riverside Scene during the Qingming Dynasty depicts the situation of the capital of Tokyo (now Kaifeng, Henan Province) during the Northern Song Dynasty, mainly in the natural scenery and prosperity of Bianjing and along both sides of the Bianhe River.

Qingming ShangRiver is a folk custom at that time, like today's festival gathering, people to participate in trade activities. The whole picture is roughly divided into three parts: the spring outside of Bianjing, the Bianhe sc

It is rich and depicts things. "Qingming Riverside Map" in the method of expression, by constantly moving the point of view, that is, "scattered point perspective" to absorb the required scene. Large to the vast fields, vast rivers, towering city guo, fine to the nails on the cart, small goods, vendors on the city, harmonious organization into a unified whole, officials, agriculture, commerce, medicine, medicine, Bu, monks, Tao, officials, women, children, poles, cables and other figures and donkeys, cattle, camels and other livestock. There are fairs, buying, wandering, drinking, gathering, pushing, boat, pulling, sedan chair, horse riding and other plots. Painting the streets and alleys, shops, hotels, teahouses, snack shops and other miscellaneous Chen, as well as city tower, river port, Bridges, cargo ships, official mansion and Maoshed village dense.

On the number of people painted in the Qingming Festival, different, common more than 500 people said (Bai Shouyi "General History of China"), 815 people said (Tang You often number meter method), 1695 people said (Qi Teng Qian "humble language volume eight"), in addition, more than sixty kinds of livestock, more than twenty wooden boats, more than thirty houses and pavilions, carts and cars, various statements are more consistent. Such a rich and colorful content is rare in the ancient paintings. All kinds of characters are engaged in various activities, not only in different clothes, but also in different expressions and temperament and arranged with various activities, which are full of dramatic plot conflicts, so that the viewer can see, with endless aftertaste.

In 1101, Zhang Zeduan's Riverside Scene at Qingming Festival was collected from the palace. Zhao Ji, Huizong of Song Dynasty, signed the first five and stamped the seal of Shuanglong .

In 1127, after the change of Jingkang, the Riverside Scene at Qingming Festival was involved in the Jin people area.

In 1260, after the establishment of the Yuan Dynasty, the "Riverside Scene at Qingming Festival" was collected into the secret government. Official craftsmen installed the pool to fake books stolen out of the palace. Sell to an expensive official, midway for the custodian and steal to sell to Hangzhou Chen Yanlin.

In 1351, Yang Jun bought it from Chen and wrote about the beginning and end. The following year, Liu Han of Jiangxi Province was viewed from Yang Zhun and postscript, known as "fine art".

Around 1461, Wu Kuan said that the picture was in the home of Zhu Hepo, Dali Temple. "Zhu Gongyun: 'This picture has a draft, in Zhang Ying' s home.

In 1451, (Ming) Li Dongyang inscribed a long postscript twice after the picture, detailed the content of the picture and the spread of the Ming Dynasty: after Hongzhi, Gu returned to HuagUniversity soil Xu Pu. When Xu died, he gave Li Dongyang.

In 1524, Tu returned to Lu Wan, the secretary of the Military Department. Lu zuo inscription. After Lu's death, his son was sold to Gu Dingchen, Kunshan, and soon returned to Yan Song, Yan Shifan and his son. During this period, there were spread many rumors in the society that Yan Pole and his son used the Qingming River Map to attack and frame the yu, and were included in the current income notes. Yan Song lost, the family property was not registered, the picture into the court.

In 1578, (Ming) under the ritual supervision of Feng Baohua. The picture from the interior to the hands of Feng Bao.

In 1644, after entering the Qing Dynasty, the pictures were collected by Lu Taiji, Bi Yuan and others. [4]

In 1799, the fourth year after Bi Yuan's death, his property was lost, the picture was collected to the Qing Palace and recorded in the Three Chronicles of Shiqu Treasure Tips.

After 1911, the "Qingming Riverside Map", along with other precious paintings and calligraphy, was stolen by the late Qing emperor Puyi to reward Pujie outside the palace, the first existence of the Zhang Garden in the Tianjin Concession.

In 1921, Puyi in the name of reward Pujie, the "Qingming Riverside Scene" and other cultural relics smuggled out of the palace, from Tianjin to Changchun puppet Manchu Palace.

In 1932, Puyi was planted under the support of the Japanese to establish the puppet Manchukuo, so the famous painting was taken to Changchun, the book building of the puppet palace. 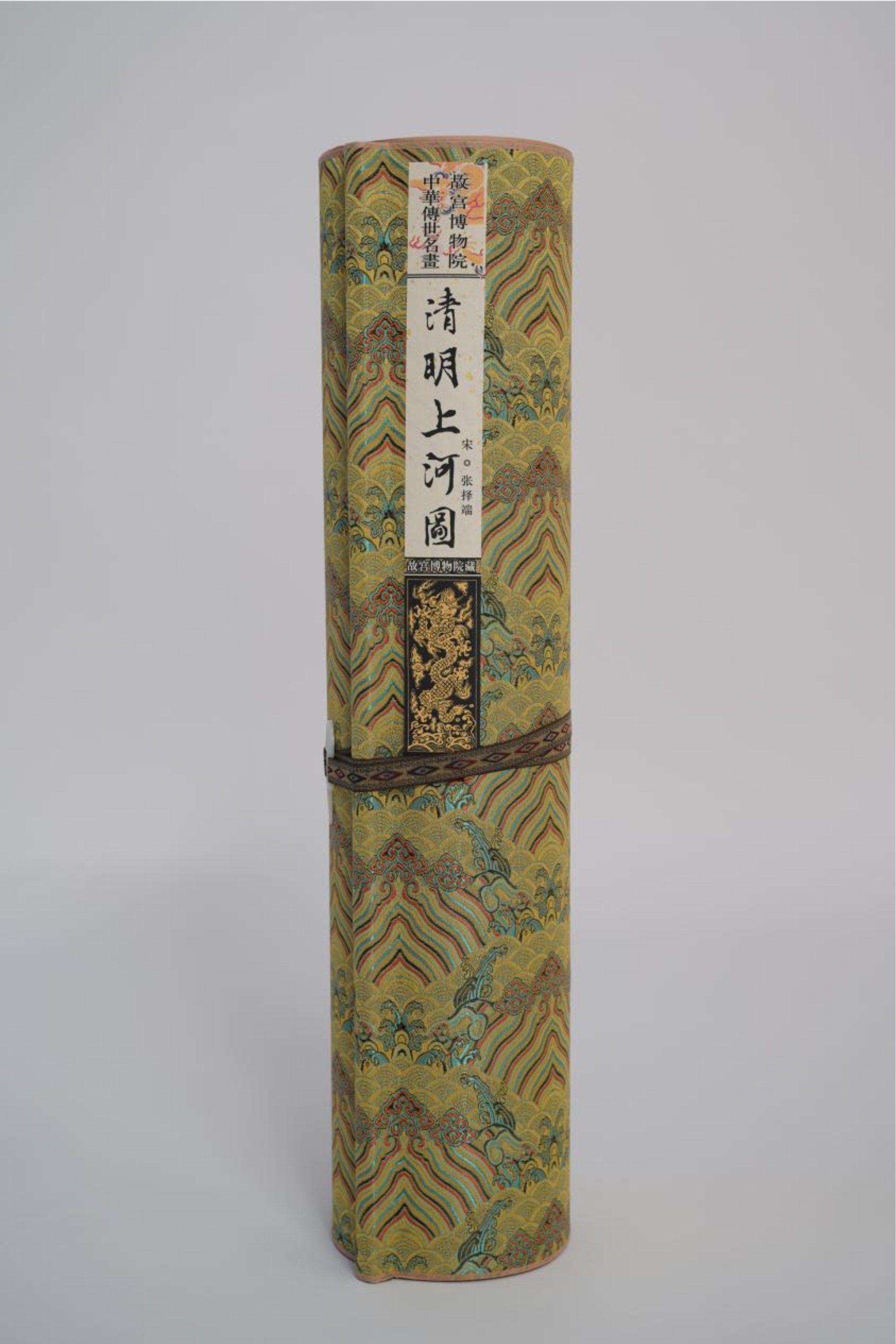 In August 1945, the Second World War came to an end, and the end of the Japanese invaders arrived. Puyi and his Japanese master saw the big things are not good, they took a flight fled to the big chestnut ditch, the puppet full palace because of the fire and a mess. In the chaos, many people took the opportunity to enter the palace to "grab foreign fishing", a large number of precious things of the fake palace were scattered to the people in the unrest, among them, there is the "Qingming Riverside Map". It was intercepted in Tonghua. Store the pictures in the Northeast Museum and transfer them to the Palace Museum in Beijing

In 1948, the PLA liberated Changchun. Zhang Kewei, a cadre of the Liberation Army, collected more than ten volumes of precious calligraphy and paintings scattered from the Manchukuo Palace through local cadres, including "Riverside Scene during the Qingming Day".

In 1949, Comrade Zhang Kewei was transferred to work in the Northeast Administrative Committee. Before leaving, he handed over more than ten scrolls to Comrade Lin Feng, one of the main persons in charge who opened up the northeast revolutionary base areas at that time. "Riverside Scene at the Qingming Festival" entered the Northeast Museum through the hands of Lin Feng, and later transferred to the Palace Museum in Beijing for rare preservation.

On September 8 to November 8,2015, the "Shiqu Bao Gu Te Exhibition" will be displayed in the Wujin Hall of the Imperial Palace. The 528 cm long Zhang Zeduan Riverside Scene on the Qingming Festival in the Northern Song Dynasty. The work was on display 10 years ago to celebrate the Palace Museum's 80th birthday. In the next 10 years, the picture appeared only in Hong Kong and Japan, but it was not fully launched.

This collection is now handed over to the marketing specialist of the company for operation and promotion. Welcome everyone to visit the company appreciation and negotiation, the majority of collectors can through the media welcome to the company to understand the details, if you want to buy, in advance to deal with the relevant procedures to negotiate the company.

A collection of transactions can not do without advertising! Since its establishment, the company has always been adhering to the "open, fair, just, honest, trustworthy" service principle, do the most practical publicity, on the top platform, enjoy the best service.

Special note: the pictures are taken in kind. If you have any questions, please make an appointment to see the kind。Tel:13311337192